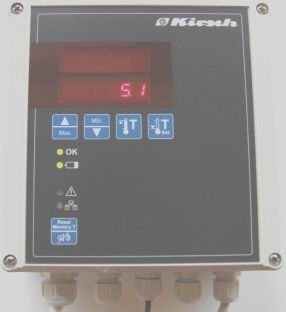 For retrofitting temperature documentation and monitoring.

Temperature monitoring and recording of Kirsch refrigerators or freezers which don’t feature a RS-485 interface or of cooling devices of other manufacturers is possible with the KIRSCH-DATALOG. The necessary ring memory is integrated in the Kirsch-DATALOG as standard. A PC-Kit-Net can be connnected via the RS-485 interface of the KIRSCH-DATALOG. By installing a temperature sensor in the inside a refrigerator or freezer can be monitored and the temperature of the chilled goods can be recorded.

The Kirsch-DATALOG evaluates the data which was recorded by the temperature sensor and monitors an upper and lower temperature threshold value. If the threshold value is exceeded an optical and acoustic alarm is being put out and a remote warning can be triggered via a potential-free contact. The collected temperature values and other status information (power failure, condition of the battery) are saved in a ring memory. With TCP/IP Gateway all data can be transferred via the RS-485 interface to a PC where it can be read by the Kirsch-DATANET software. The module is equipped with a Li-Ion battery to buffer the unit in the case of a power failure. In this operating mode, the battery gives a buffer of up to 30 hours.

Scope of supply of DATALOG-Net

KIRSCH-DATANET SOFTWARE PACKAGE: Our software KIRSCH-DATANET captures, evaluates and documents the recorded data. The recorded data can be exported to other programs and sent via email. Additionally, the program offers a monitoring function. The current interior temperature and alarm messages from the connected refrigerators and freezers are shown on screen.

This website uses cookies and similar technologies for analysis of user behavior. By clicking on 'Yes, I accept' you agree this fact. You can set your individal settings by clicking on 'Advanced settings'. You can revoce your agreemeny every time. Read more about by clicking on the correspondent link.

These cookies collect information about the surfing behavior of visitors to our websites. This enables us to make the structure, navigation and content of the website as user-friendly as possible for you.